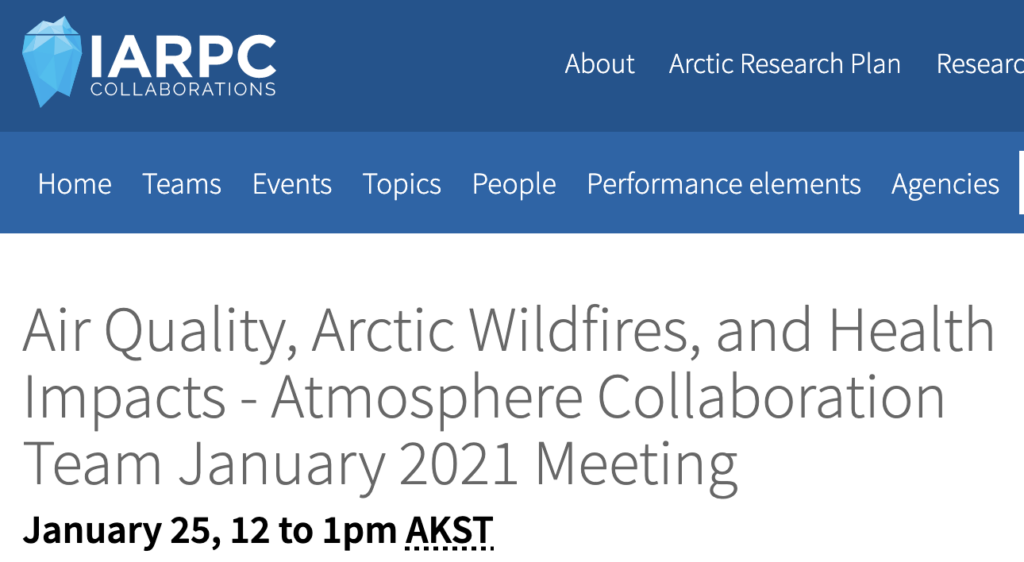 We updated the Interagency Arctic Research Policy Committee (IARPC) on the main ALPACA field study, which was delayed by COVID precautions and now is planned to start in January, 2022.  More information, the slides we presented, and a video are available from the IARPC collaborations site.  Thanks to IARPC for facilitating this event.

The FairAir project, which is organized under ALPACA, is holding a series of informational events to discuss air quality in Fairbanks.  See the https://fairair.community.uaf.edu site for more details. 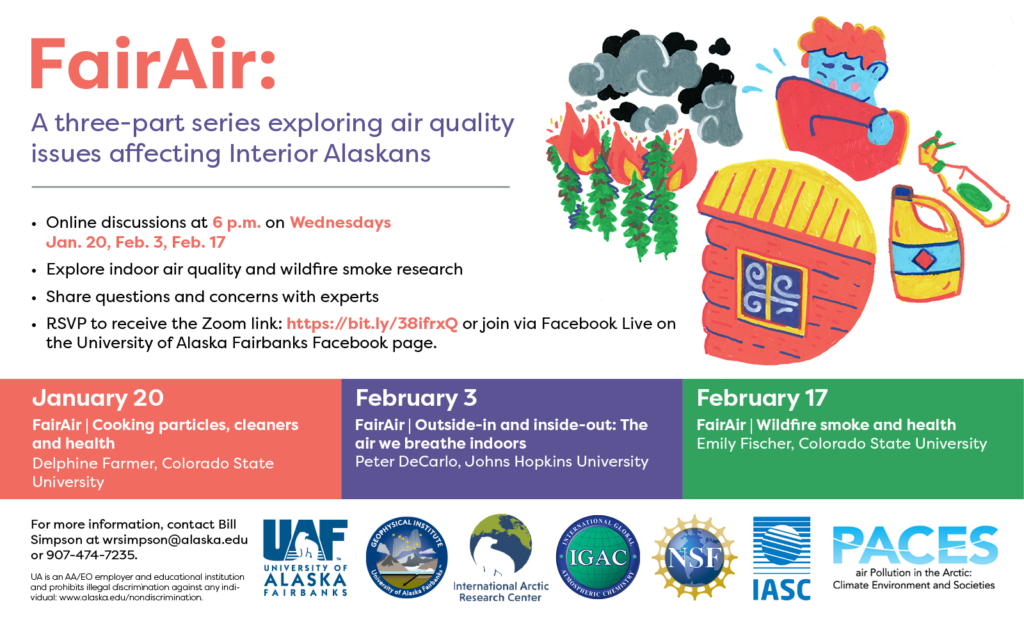 We have decided to delay the Alaskan Layered Pollution and Chemical Analysis (ALPACA) field intensive that was planned for Jan-Feb 2021.  This decision was made in the light of the ongoing COVID-19 pandemic.  By delaying the project, we reduce COVID-19 risks to the community and participants, which was foremost among our considerations.  We were also concerned about the possibility that restrictions on travel, social distancing, and the complexity of bringing dozens of researchers from around the globe might compromise data coverage or lead to missing measurements, adversely impacting our scientific goals.

We are now planning to hold the main ALPACA field intensive in Jan-Feb 2022, stay tuned for updates via this website or by signing up for the mailing list.

We hope that you all are safe and healthy and remain so during this challenging time.

We presented recent finding from Fairbanks wintertime air quality studies at the Interagency Arctic Research Policy Committee (IARPC) Joint Atmosphere and Health & Well-being Collaboration Team February 2020 Meeting.   There were two presentations, both of which are captured in the video below:

We invite colleagues to join our open science meeting   associated with the Fall American Geophysical Union meeting in the ARCUS meeting space. The meeting is 12:30-13:30 on Thursday, December 12 at Hotel Nikko, 222 Mason St, San Francisco, CA 94102, in the Monterrey II room.   Note that you don’t need to be registered for AGU to attend this side meeting. The meeting is over lunch, so you may want to bring some food to it.   We hope to see you there and will post a report on the meeting to this website.

The formation of secondary aerosol particles (sulphate, nitrate, organics) in cold, dark, wintertime/ early spring Arctic conditions is very poorly understood. The role of Arctic boundary layer meteorology that trap pollution near the surface during stable conditions is also unclear. These gaps in our knowledge hinder our ability to simulate aerosol particles in background Arctic Haze and in air under the influence of local pollution, such as wood and fuel burning, and their impacts on atmospheric composition and climate. To tackle these issues a major international measurement campaign is planned for Jan/Feb 2021 in and around Fairbanks, Alaska, as part of the ALPACA (Alaskan Layered Pollution and Arctic Chemical Analysis) project developed as part of the international IGAC/IASC PACES (air Pollution in the Arctic: Climate, Environment and Societies) initiative,   https://pacesproject.org/. 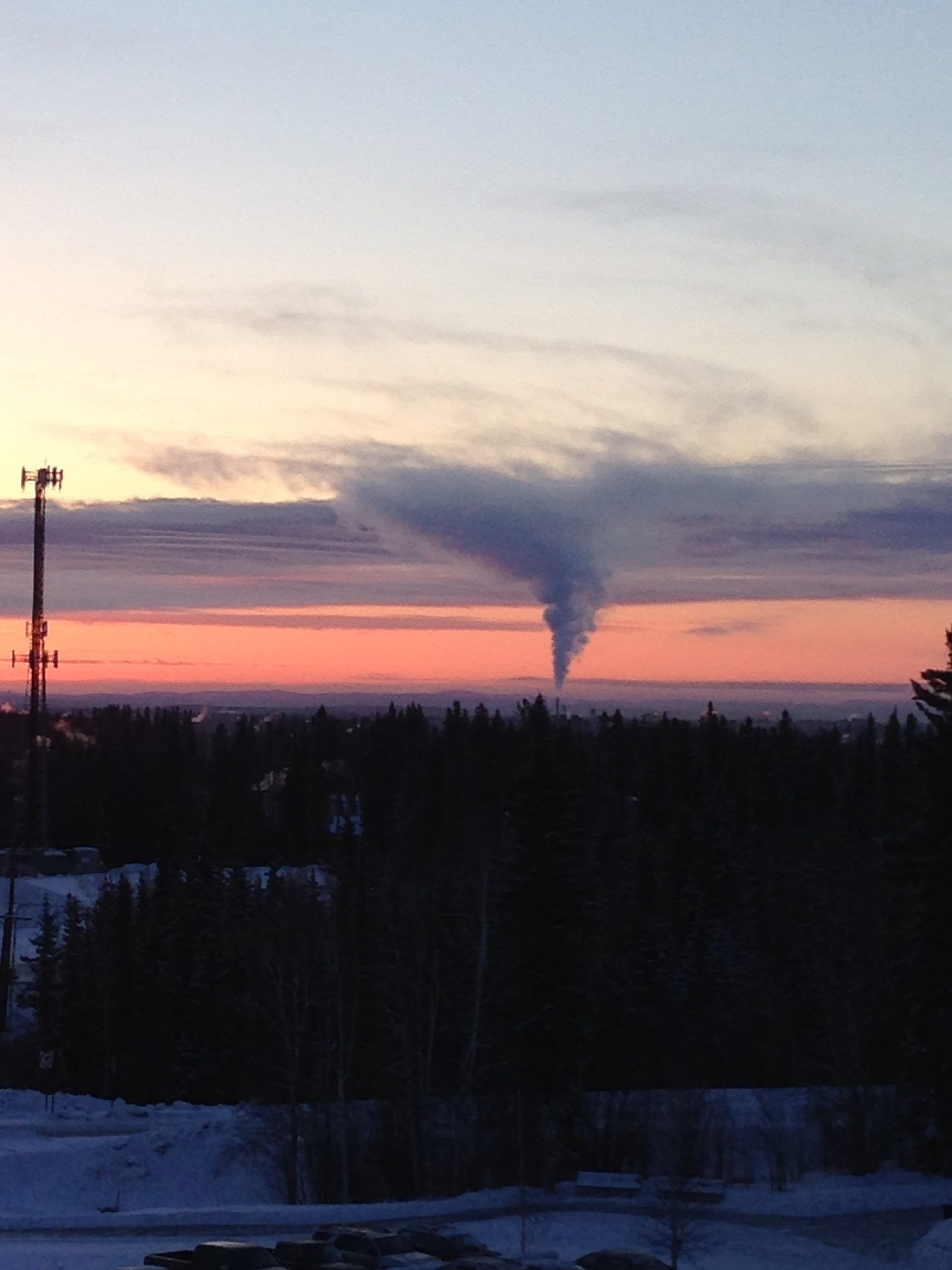 To prepare for 2021, researchers from the Geophysical Institute at the University Alaska Fairbanks (UAF) and French laboratories (LATMOS, LPC2E, LA, IGE, LCE, ISTeP) are participating in a pre-campaign in Fairbanks in November-December 2019. The focus is on testing instrumentation under harsh wintertime conditions and making some preliminary measurements of aerosol sources and distributions during Arctic winter, a time of year when very little data exists. The campaign is being carried out with support from the French Centre National de la Recherche Scientifique (CNRS) program LEFE (Les Enveloppes   Fluides et l’Environnement), the French Polar Institute Paul-Emile Victor (IPEV) and related UAF projects. 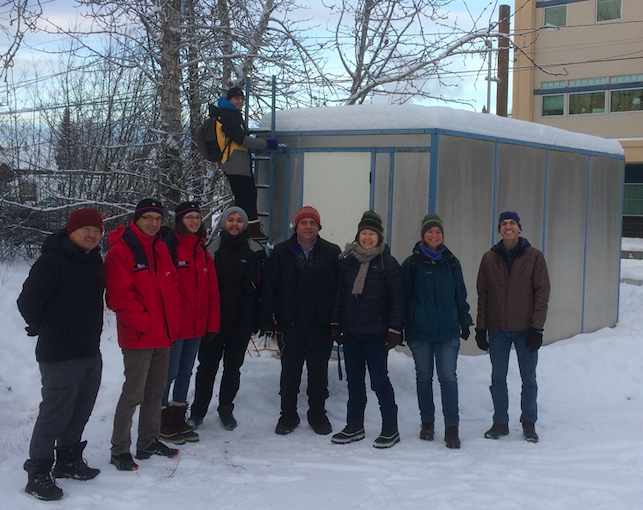 The National Science Foundation has announced the funding of a major “Navigating the New Arctic” project called SNAP-TEC, which is summarized below.   We are very excited to be doing this study and look forward to learning more about how to navigate through Arctic air pollution.

Sustainably Navigating Arctic Pollution — Through Engaging Communities (SNAP-TEC) is focused on improving understanding of wintertime Arctic outdoor and indoor air pollution. The cold and dark wintertime conditions of the Arctic lead to frequent poor air quality episodes linked to local emissions along with temperature inversions that trap pollutants in the areas where people live. Infrastructure planning such as energy generation and industrial activities along with residential choices of heating fuels such as wood, fuel oil or others are critical aspects of this problem. Residents spend the majority of their time indoors during wintertime, so most exposure to pollutants occurs indoors. From this background, fundamental knowledge gaps were identified in: outdoor/indoor air transport, indoor pollution sources such as leaky heating appliances, and chemical transformation of pollutants under these Arctic conditions. These gaps must be closed to understand the impacts of air pollution on Arctic communities and improve community health. Discussions with community members will assist researchers in identifying local concerns regarding air quality and in designing appropriate sustainable development frameworks with the goal of improving air quality for Arctic peoples.

To investigate wintertime Arctic air pollution issues at the intersection of the natural and built environments and social systems, SNAP-TEC uses a convergence approach that starts with a community engagement process to build a research and co-generation of knowledge program that has direct impacts on the community. This project has grown out of organizing efforts under the International Global Atmospheric Chemistry (IGAC) Project activity “air Pollution in the Arctic: Climate, Environment and Societies’ (PACES) and the Alaskan Layered Pollution and Chemical Analysis (ALPACA) project, which have documented knowledge gaps in this area (see the ALPACA whitepaper, readily available online). SNAP-TEC brings together a multi-disciplinary team to investigate this problem, with the center focus being a wintertime field campaign in Fairbanks, Alaska, where the scientific and social issues surrounding poor air quality can serve as a case study to inform practice and policy in similar cities and villages across the broader Arctic region. The resulting knowledge of pollution sources and chemistry, housing and pollution control technology, and social aspects can assist New Arctic communities to propose appropriate solutions that work for residents. Local and indigenous peoples are most likely to be affected by Arctic development, so our community engagement process will include local Fairbanks residents and Alaska Natives. The project measures indoor and outdoor air quality using state-of-the art instrumentation to advance fundamental understanding of air pollution sources and chemical processes under cold and dark conditions, indoor/outdoor air exchange and physicochemical changes to pollutants upon warming to indoor conditions, sulfur oxidation chemistry, and toxicity of air pollution. The field program is combined with community meetings, public participation in scientific data collection (a.k.a. citizen science, using inexpensive air-quality sensor monitoring) and a survey to assess public understanding of air quality, trust in science, perceived risk and uncertainty, and support for air quality policies. The SNAP-TEC research team involves a diverse group of natural and social scientists and engineers with extensive student involvement to address the problem. Through the international PACES organization, lessons learned from this investigation will be extended to an international pan-Arctic context through identification of fundamental processes and best practices, informing Arctic development and future studies.

We held a webinar on August 22nd 2019 to discuss recent findings, plans for atmospheric measurements during winter 2019/20 and longer-term plans for the main ALPACA study in Jan/Feb 2021.   This webinar was recorded and is available at the link below.   Note that the video has chapters (accessible from the three horizontal lines near the top left) that allow you to jump to parts of the video.

To assist in planning for the winter 2019/20 season, selected slides on the Alaska DEC Air Monitoring program are available., and UAF activities are also available here.

ALPACA was highlighted in the Arctic Research Consortium of the United States (ARCUS) Witness the Arctic Community Highlights.   Read all about it:

Video is available from the UAF Science for Alaska Lecture series presentation at the link below.